The Doorless Bathroom Stall Of The Sacsara River

Back in 2012, I took a trip out to Machu Picchu in Peru. My group’s trek to the ancient city included a stop at Cola De Mono zipline near Santa Teresa. We had about an hour of time to kill before the employees returned from assisting the group before us and, somewhere along the way, my breakfast was ready to escape my intestines.

I walked around the large, outdoor waiting area and found the sign for the restroom. The bathroom was many feet away from the entrance facing the Sacsara river that borders the park on one side.

I walked over to a small paved area where a lone, single-person stall stood under the shade of a number of trees. Three of the stall’s sides were dressed in thin bamboo reeds and foliage and the entrance…had no door!

“Where’s the door?” I asked out loud to no one because everyone was near the entrance killing time by playing a bean-bag toss game. There was no door, no curtain, nothing to spare the world, especially the river of gorgeous, crystal-clear water, the view of my answering nature’s call.

I figured the bathroom was out of order but a flush of the toilet showed me wrong. Meanwhile, my stomach continued to warn me there’d be no chance of flying over the Sacsara on a zipline with irritable bowels (all those damn potatoes!).

I sat down, pulled my pants down far enough and went to town.

There I was, sitting on and shitting in a toilet facing the Sacsara river, various exotic birds singing their songs amid the gentle rush of the running water, the cool mountain air doing its thing as the greatest air freshener money will never be able to buy.

It was the most unexpected place to find bliss. 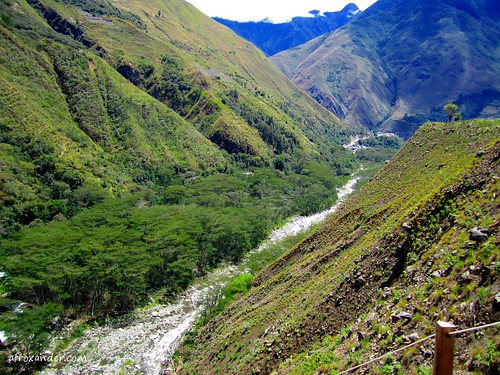 You can see the roof of the stall in the lower-left corner.

Afroxander is the nom de guerre for writer/photographer Ivan Fernandez, based in Southern California. He currently writes for L.A. Taco and Gamecrate while studying at San Diego State University.
View all posts by Afroxander →
This entry was posted in Latino, Travel, Uncategorized. Bookmark the permalink.