Ochoa, right, on the bench against Ecuador, March 2015.

It’s unofficially official: goalkeeper Jesus “Chuy” Corona of Cruz Azul will guard Mexico’s goal during the Copa America tournament in June. Guillermo “Memo” Ochoa will do the same the following month for the Gold Cup tournament, which coach Miguel “Piojo” Herrera has prioritized as a must-win.

The selections make sense. Corona had a great game against Ecuador last month where he made a number of key saves including stopping a penalty kick in his team’s 1 -0 victory. Corona and Mexico will face Ecuador again in the C.A. group stage alongside Chile and Bolivia.

His regular spot in La Maquina’s starting XI guarantees he’ll be in fine form entering the tournament, which will be packed with World Cup-caliber CONMEBOL teams looking to win the Copa and its coveted 2017 Confederations Cup spot. 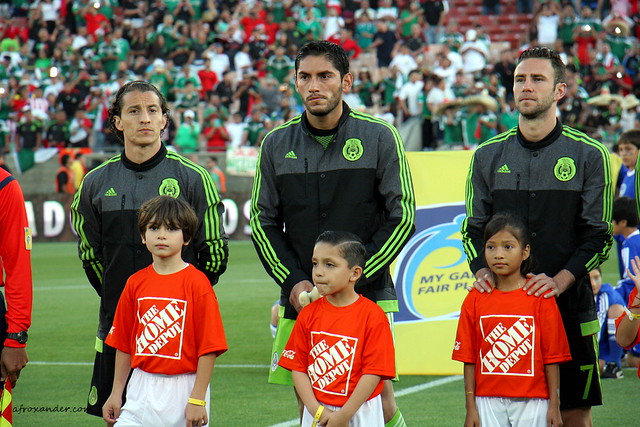 Meanwhile, Ochoa’s move to La Liga hasn’t turned out as promising as he and fans his had hoped. The keeper who stunned the planet with his breathtaking saves at the 2014 World Cup has spent much of his time with Malaga CF as its secondary keeper behind Idriss Kameni.

His spot in CONCACAF’s Gold Cup will give him a month between the end of La Liga and the start of the aforementioned tournament to train with his World Cup squadmates. That could help boost his morale given his current situation.

The tournament would also provide an avenue for Ochoa to regain any form he’s lost on Malaga’s bench. Mexico’s G.C. opposition is on a competitively lower level with El Tri set to face Trinidad & Tobago, Guatemala, and Cuba in the group stage. It’s a far cry from Corona taking on Chile, Ecuador, and possibly Brazil or Colombia later on.

Those early matches c/should help the keeper regain his footing and form in time for the next round of matches against tougher CONCACAF opposition (possibly Honduras, Costa Rica, and the USA).

Corona will get to show off his skills in South America against tough competition and Ochoa will rejoin his World Cup squad for an opportunity to show the world he hasn’t lost a step despite his role as a secondary goalie.

Afroxander is the nom de guerre for writer/photographer Ivan Fernandez, based in Southern California. He currently writes for L.A. Taco and Gamecrate while studying at San Diego State University.
View all posts by Afroxander →
This entry was posted in Football (soccer), Latino and tagged Guillermo Ochoa, Jesus Corona. Bookmark the permalink.